About Painting a Portrait of Maureen 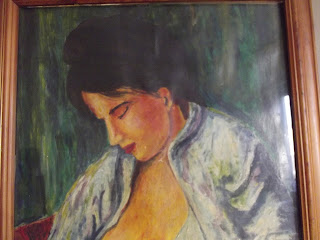 February 9th 2016.
When a very ambitious young amateur artist I thought nothing of attempting to copy pictures painted by the likes of, Leonardo, Rembrandt, Constable, Van Gogh, Monet, Paul Henry and of course the wonderful, Renoir, seen above. 'Maternity'.
Nowadays I am far more likely to be found portraying famous Irish landscapes and seascapes.
Always a frustrating pastime but often rewarding as more than 600 works of mine have been sold.
Today...or tomorrow I hope to start a portrait of Maureen.
Very sadly Maureen passed away last September and I am still reeling from the blow. We were married for almost 56 years. She was ..is, the love of my life.
I painted Maureen many decades ago and the picture can only be found on an old photograph of my son, John it can bee seen over his shoulder on the snap
. The portrait of Maureen was hung on the wall of our last home in the UK for many years.
Posted by Unknown at 8:36 AM 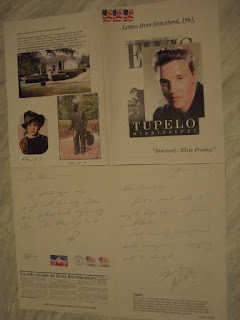 Would this make a good movie?

This is a bronze statue of "Elvis at 13" years old, by gifted sculptor Michiel Vander Sommen, which is located close to the little house where Elvis Presley was born  in Tupelo Mississippi. It was unveiled August 2002.

In 2002 a statue of 'Elvis at 13' was unveiled by gifted sculptor, Michiel Vander Sommen, following my letter to the Mayor of Tupelo at the time Larry K Otis suggesting a statue of Elvis as a boy would be good for tourism to the city.

It has been a great success and gives Ireland a nice little part in the Elvis Presley story.

2017 will be the 40th Anniversary of Elvis's death and the commemorations in the world's media will be momentous!

Spoke about Elvis to Marian Finucane on RTE1 Radio recently.

This story and all the unbelievable but true stories that go with it, including mail from Elvis co-stars , Dolores Hart and Anne Helm,a stay in a Memphis penthouse with his cousin,  Resolution from the city of Tupelo, a meeting in Dublin with Scotty Moore, and the letters from Graceland dated 1961, plus messages from the Duchess of Devonshire about Elvis, would  make a fascinating TV or Radio Documentary.

Or do I need a Ghost writer? 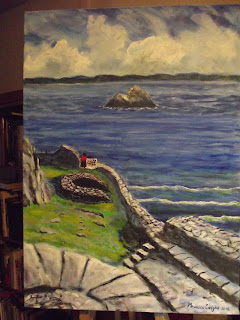 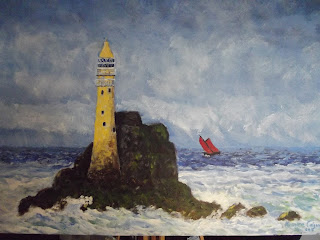 UPDATE 26th January 2016.
My latest paintings, The Fastnet lighthouse and Skellig Michael off the coast of Kerry Ireland before the "Star Wars" crew arrived. The smaller Island is a home for some 10,000 Gannets!
Maureen was not strong enough to make the exceedingly steep climb with me, back in 2014, so I placed her there myself yesterday. Although she is no more; She remains, Always on My Mind.
The Elvis Presley version off course.
I hope to do a much larger version of the scene later.
Posted by Unknown at 12:09 AM 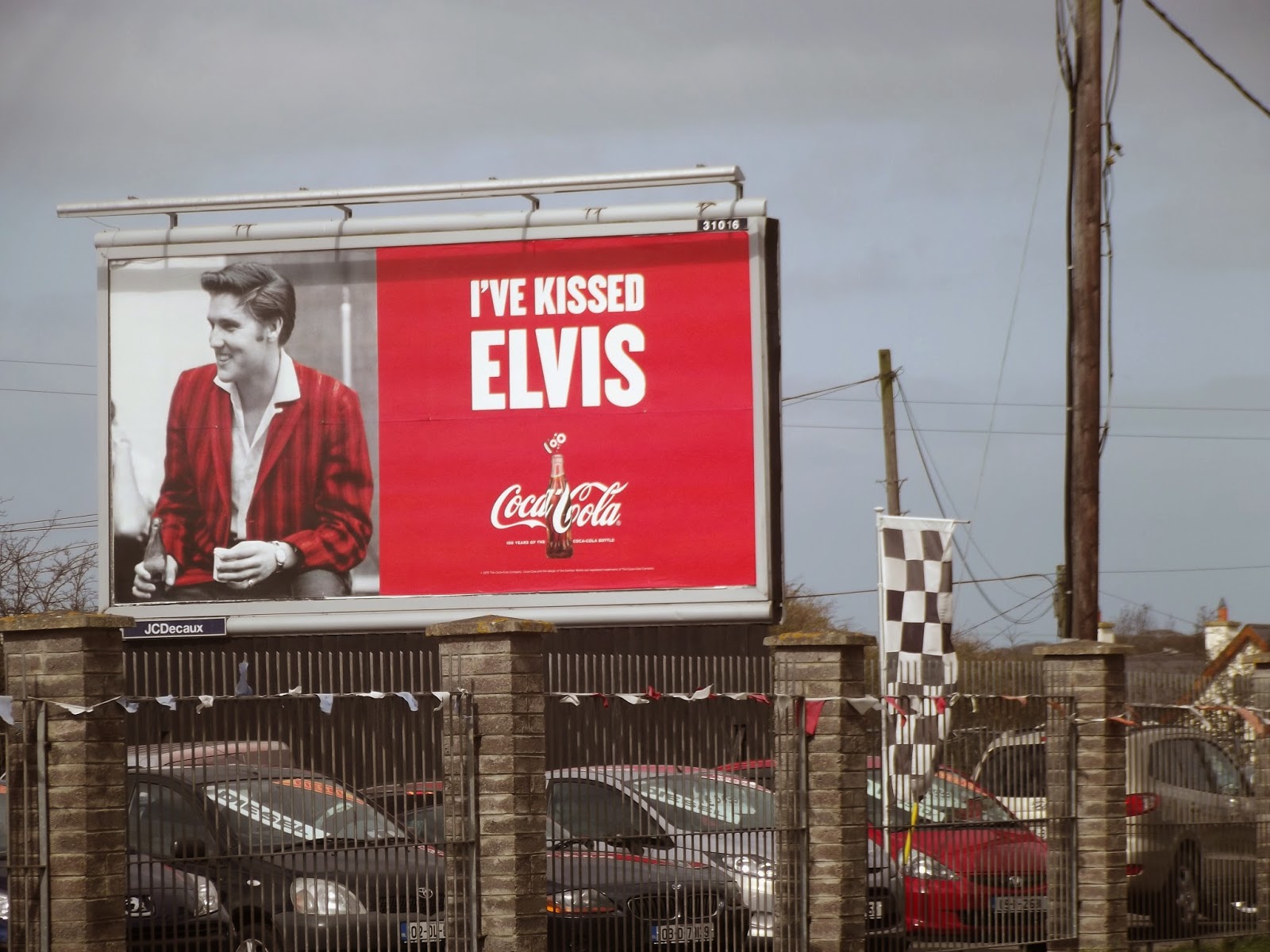 Update 17 April 2015. Busy gardening and spreading flowers around the locality close to our home.

These new posters will be seen all over Ireland reminding people just how important Elvis Presley was/is to modern culture.

Elvis is on the building!

‘All Shook Up’ in downtown Sanford

This is a page getting a lot of Attention on google  yahoo, and webcrawler
‘The Elvis Presley Festival, Tupelo'   I contacted the Mayor of Tupelo back in 1999. I enquired when is the Elvis Presley Day in Tupelo?

A case for Sherlock Holmes. Elementary my fellow Elvis fans. 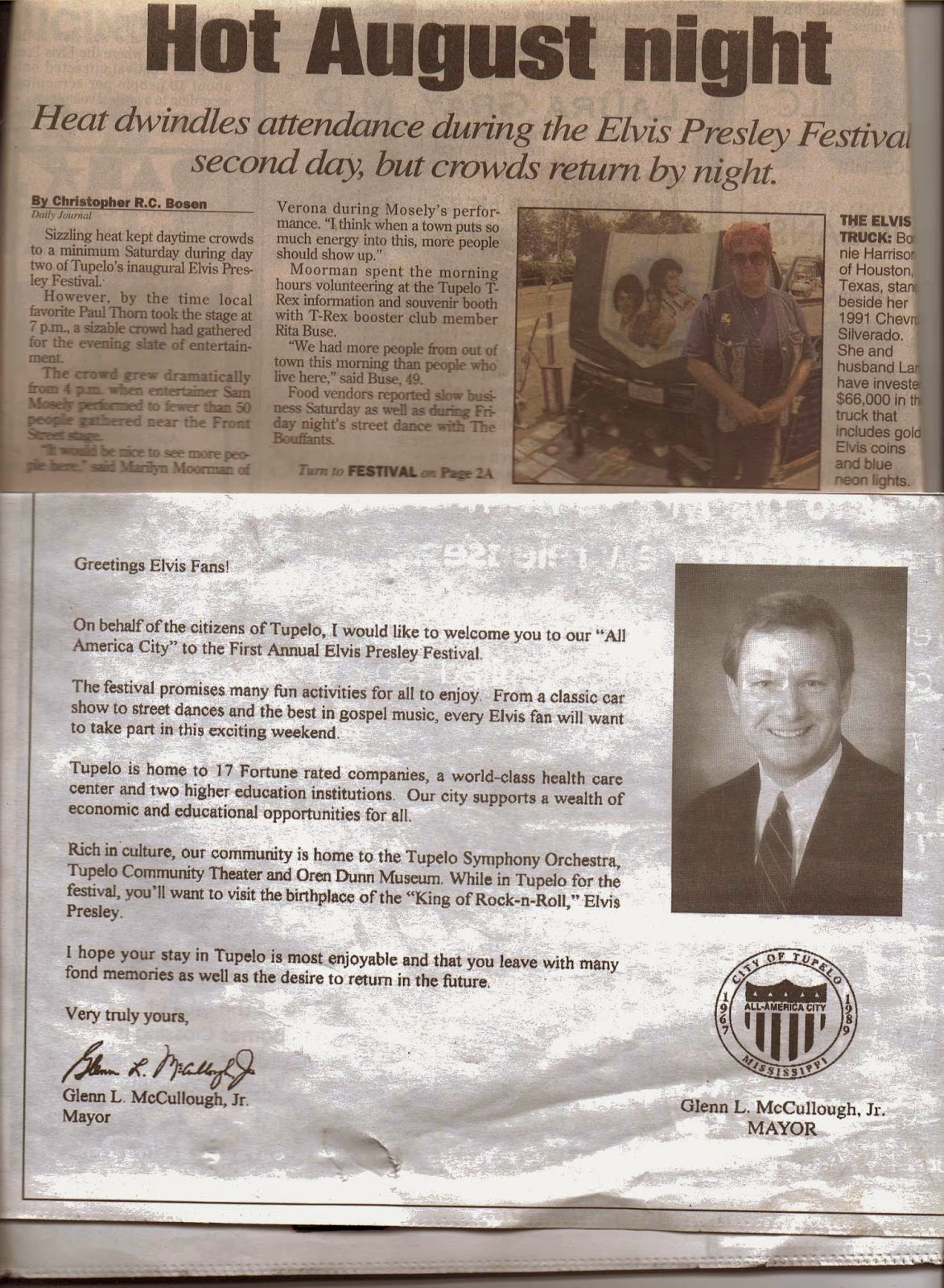 "I will have to get back to you on that" said the Mayor, Glenn L McCullough. Two day later his secretary called us here in Ireland by telephone and said, "The Mayor would like you to know an Elvis Festival will take place in Tupelo next August 1999.
The first, after more than thirty years of virtual inaction.
I believe it came about because of my call to the Mayor. There is bound to be a lot of Elvis stories in the media as we approach the 40th Anniversary of his death. Call me 01 8403685.
. Enough material for a TV or Radio Documentary. 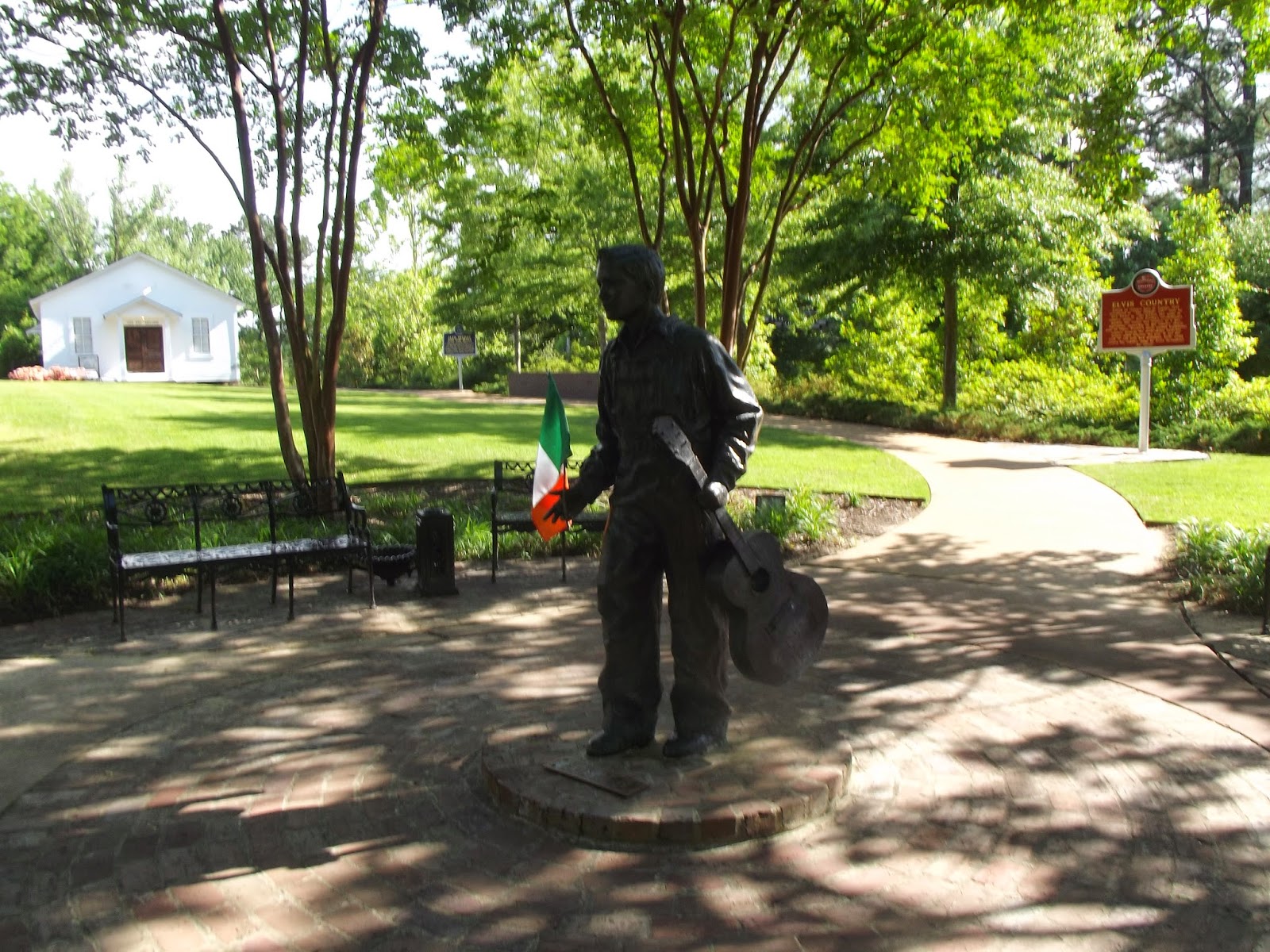 Update 29th March 2015.
7th June 2014.
My wife Maureen and I
placed the Irish tricolour in the hand of the bronze statue of 'Elvis at 13' recently because the idea of portraying Elvis as a boy came all the way from Ireland to Tupelo Mississippi via snail mail to the Mayor, Larry K Otis, in 2001. He wasted no time and the statue was unveiled on Elvis's birthday the 8th of January, 2002.  A story in search of a Documentary maker. Where's RTE!  Or Any adventurous folk willing to take on an extraordinary Elvis Presley saga. Yes saga!

Kate Bush on the cover of Classic Pop magazine, 10 page coverage of her astonishing career in music. 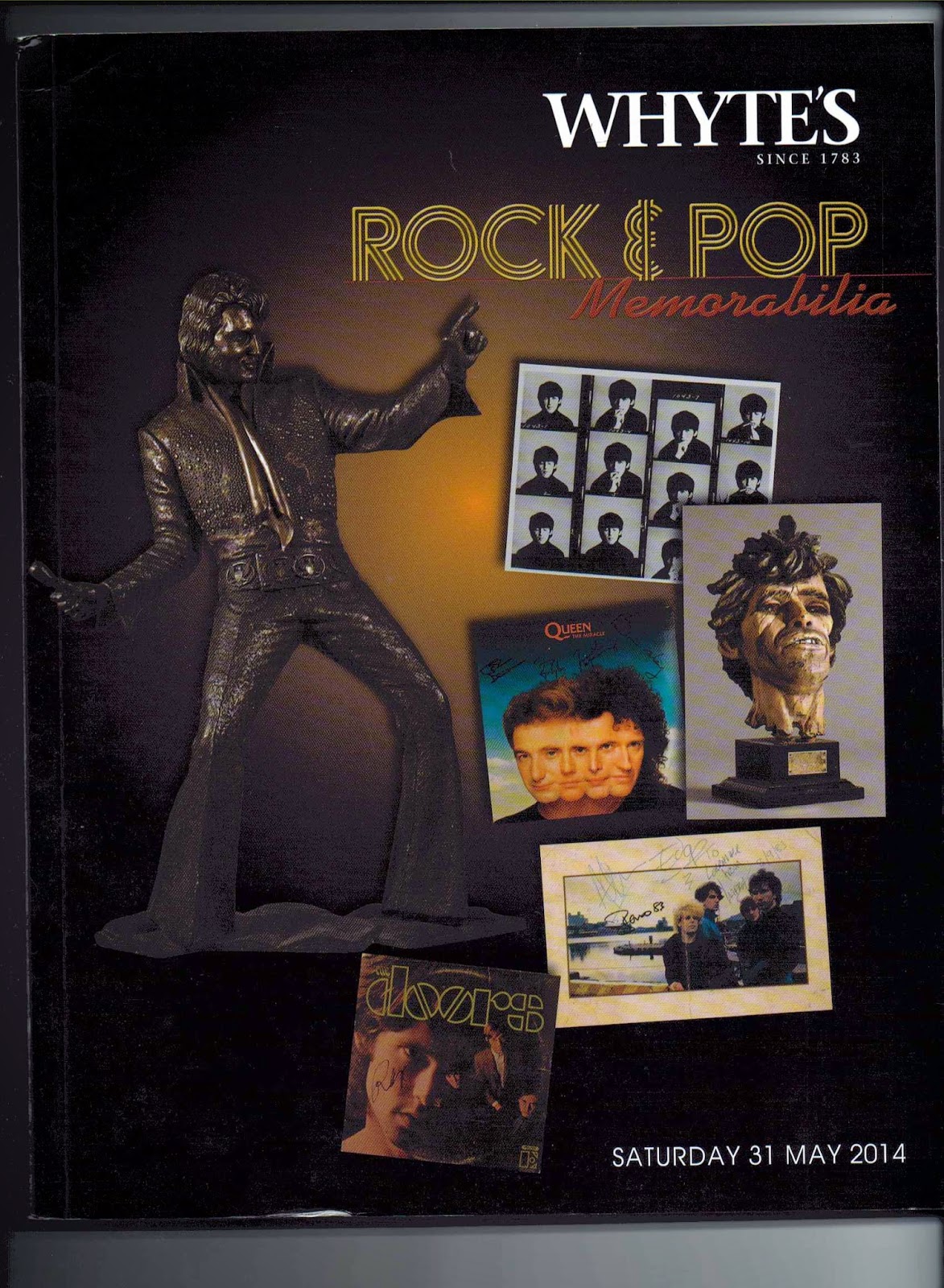 A Kate Bush letter to me is included, plus some of my Elvis related photos from movie stars.

The proposed Tupelo Elvis Trail is a most welcome development.

For Los Angeles Times readers, Kate Bush, below.
Below, Elvis wearing green in 1956.
Elvis on the cover of Vintage Rock magazine this month. 60th Anniversary 10 page feature.
PRISCILLA PRESLEY visit's Elvis Presley's birthplace in Tupelo MS last Saturday and looks upon the statue of "Elvis at 13", by sculptor Michiel Van der Sommen, from an idea first proposed by an Elvis fan in Ireland! Priscilla received a miniature version of the statue as a gift.
Story in the Washington Post and travelling around the world.

The sculptor mentioned above, has included the photo of Priscilla with his statue of Elvis, on his website! 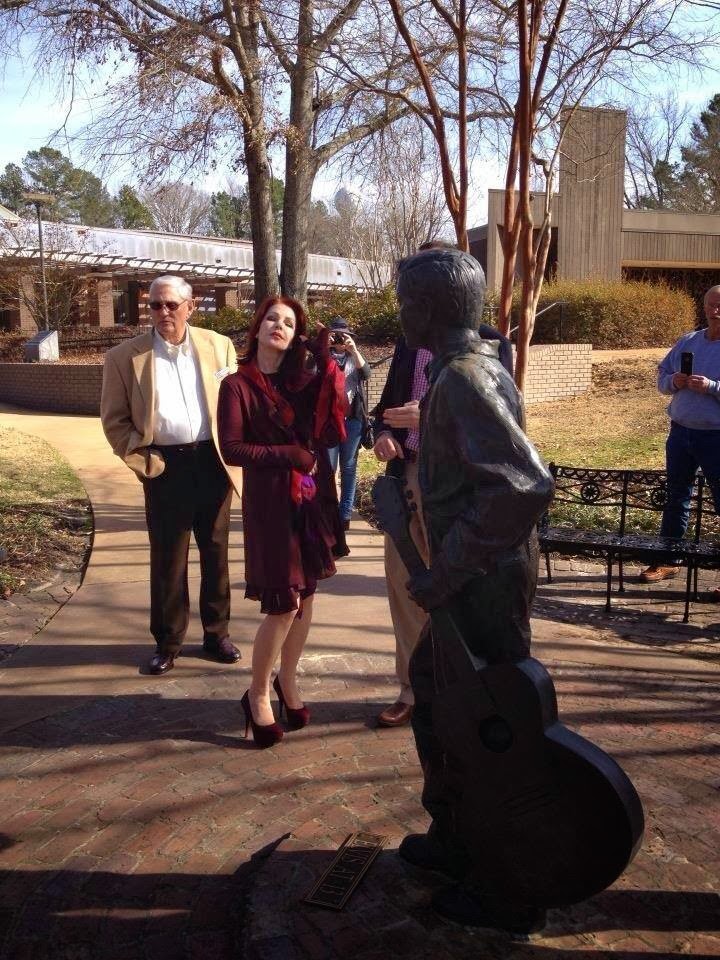 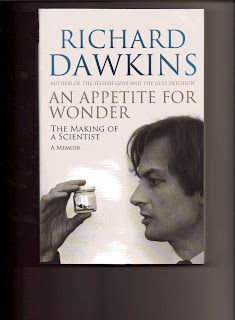 Richard Dawkins a huge fan of Elvis's Gospel music in his teens! The book is a fascinating look back on his extraordinary life. 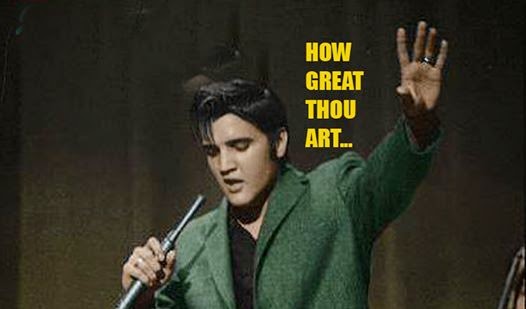 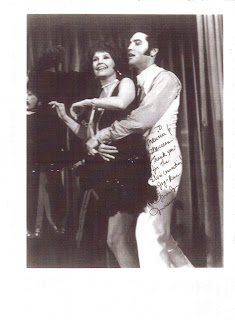 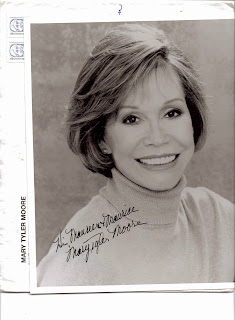 Sent from her office in New York more than ten years ago.
She starred in Elvis Presley's last film, Change of Habit, as a Nun!